Third issue of the third season of “La Rivière” CD series, « Go Outside » by Robert Curgenven is a new work from, and inspired by the series of recordings made around the Taurion Valley.

After delaying work on this project for way too long, I found it ironic to be living by an estuary in Cornwall when I finally edited the piece.
Whilst literally overlooking the Fowey River I edited hundreds of fragments cut from Cedric Peyronnet’s extensive recordings of the Taurion River in France. In transposing these recordings to a new piece, I decided to impossibly look at the river in its entirety, rather than focus on any specific section or group of recordings (although I have only ever seen a short section of the river personally). To bring the river itself to the fore I set about removing bird calls, animal, human and (incidental) machine sounds from the recording archives, which in many ways reduces the remainder of the recordings to iterations of white noise and their spatial articulation of the areas recorded. This led to a somewhat brutal and dislocating aesthetic. During breaks in the editing process I was also struck by how much more enjoyable it was to sit in our garden outside by our river, the interplay of the sound of the local birds and ever-present gulls, boats on the river, the cool air. All this made it obvious how ridiculous it was to sit inside and labour over a computer to produce a piece about a river from these 4+GB of recordings from a river. How could I really make sense of the nearly 5 hours of recordings of the Taurion River? What kind of connection is there that could be established in a 20minute piece without succumbing to the ontological overload of billions of droplets of water colliding and condensing to create a river which at times is a coursing torrent, then at times a trickle? And how to neutralise the anthropomorphic tendency of listeners to project feelings and personalities on to the sounds of water, like “angry waterfalls” and “playful burbling”, when the truth of these encounters is really only apparent by visiting part of the totality of the river’s length and experiencing its movement in person rather than through easy remove of a hi-fi simulation. “Go Outside” attempts all these impossible tasks, may well fail in that attempt, but perhaps phrases its iteration in the form of a polemical imperative to follow its directive… 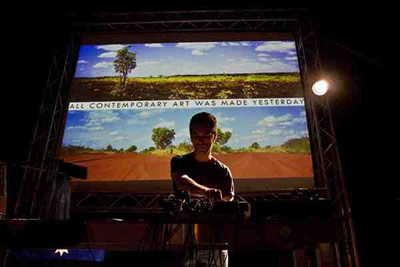 Robert Curgenven (1974) suffuses immense fields of constantly shifting sound with an elegant tactility and mesmerizing detail. His compelling work spans immersive resonances via turntables and custom-made vinyl, instrumental harmonics and guitar feedback, to carefully detailed field recordings from remote areas in which he lived for many years.
Drawing on the physicality of sound – and not just the physical impact on the body but the way in which the auditory can shape our perception of space and the flow of time – The Wire surmises that “behind the music (to these ears at any rate) lurk such [disparate] presences as Alvin Lucier, King Tubby, Murray Schafer and Eliane Radigue” Curgenven has performed throughout Australia and Europe, including Club Transmediale , Ultrahang Festival (Budapest), Feste dell Acqua (Vicenza/Italy), Audiograft Festival (UK), Define Festival (Denmark), Centre for Contemporary Art (Gdansk), Radial System V (Berlin), C/O Pop (Koln), Alice Springs Desert Festival and Darwin Festival.
He has presented sound, audiovisual and sculptural work in group exhibitions including Transmediale (Berlin) and 10 Years of Microsound (Diapason Gallery, New York) as well as galleries throughout Australia, Italy, France, Poland, UK and Germany including solo work at the Centre for Contemporary Art, Torun (Poland).