First issue of the second season of “La Rivière” CD series, “Drop collision near 45 ° 47’12N / 2 ° 02’07E” by Bruno Moreigne is a new work from, and inspired by the series of recordings made around the Taurion Valley .
Composed solely with the sound from the source of the Taurion River (Creuse, France) until its ultimate decomposition fragments, to extreme harmonic frequencies by Fourier’s theorem, without any additional sound.
A flow emerging from the source, added the geological context of the Plateau Millevaches composed of granite older: 350 to 400 million years. Here, prior to erosion, there are several million years the Massif-Central was like a Himalayan mountain.
Photographs by Yves Lapeyre. 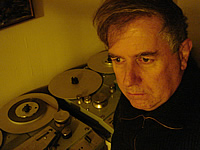