Second issue in the « La Rivière » CD series, « Esprit flottant » by Jos Smolders is a beautiful and fragile re-composition of the sound space of the Thaurion river. A “floatting soul” aural journey on the river.

24-1-2009
Preparing for K146 project
Today a DVD arrived with basic material for a new project. I have a few ideas about what I wil do but it’s all rather conceptual. One of the ideas is to filter each recording using the map coordinates. But that will certain not be all. Maybe it’s a nice starting point. The real work still has to start.
16-2-2009
Yesterday I spent most of the afternoon browsing through the hundreds of soundfiles. I catalogued the files (loud and wild water vs. easy stream vs. no or hardly any water) and then re-listened to some of them. I also tried some specific filtering (using a spectral interface) and running the files through compression settings. Some recordings are really beautiful (24 bit, stereo) and I’m tempted to use them in other compositions (but I won’t, don’t worry 😉 ). It’s your typical messing-around-with-the-material-fase.
20-2-2009
Working on some ideas and samples and edits. And as I promised at the beginning of the year that I would come forward with more samples, here’s a large one. The call of a bird is slowly granulated and then flows into the sound of the river Taurion.
24-2-2009
Yet another blorp: the thought that the river has its own voice, which concealed by the never ending spattering of water on the surface. But it’s still there. When I do a spectral view on the recording at very fine grain then I can see that certain frequencies are stronger than others and that they are continuous. I made a filtering, leaving only those frequencies intact.
30-3-2009
I now have some five parts that I work on and which I will or will not glue together later on. I am contemplating whether I should just present them as tableaux vivants in separate parts. That would make sense since each of those five parts concentrates on one (or two) original recordings. One particular place that I worked today was Combe au Moulin.
The original water recording was edited with a ducking technique and then reverberated with the special DFX Transverb. Think of it like a tape loop with two independently-moving read heads. There are a lot of parameters that can be controlled and a parameter randomizer for the impatient. I was able to extract a cool ringing sound from it. After that a second movement focused on further layering that recording with harmonized subchords. It seemed to magically come together.
Another work started with the recording of a bird. This recording was at the Dognon. There’s actually no water sound in this piece but I guess it was recorded somewhere on a slow streaming part a bit off the bank. The call of the bird was isolated and then repeated. After a while a heavily filtered version of a river recording shows up. Interestingly in the original recording it’s most of all the water that you hear. In this filtered version you can hear cows mooing in the distance.. funny.
15-4-2009
Constructed a part that will precede the bird dissolves into water part (see post of February 20, 2009). It’s rather noisy, I;m afraid. That’s actually because I was skipping through all the sound files with recordings of fast moving water. The idea was to create my own noisily running water by mixing very short snippets of the originals. What I have now is 45 seconds consisting of 0.2 second samples of water, connected randomly (so there are in total 225 snippets, that’s right).
The second stage was to construct a head and a tail to that piece. Well, I’ll leave that in the dark for the moment, but here’s the provisional result of my labourings of today (while recovering from my kidney ailings).
18-4-2009
Yesterday I went over to a first session of collating the various parts for K146. I got to a satisfactory structure quite quickly but of course the various connective parts needed adjustment.
I did a complete overhaul of one part.I have split some 12 recordings into 9 slices (0-75hz, 75-150hz, etc) and used the slices to built up a new, imaginary river. The build up structure is again going with an increasing speed, so the tension also builds up. Because the material is more detailed it is also more flexible for my use and the new result is much better.
Next step is looking at the right volume balance, the crossovers of the several parts and taking care of phase problems. Then finally a mixdown from 32bit to 16bit and we’re done. 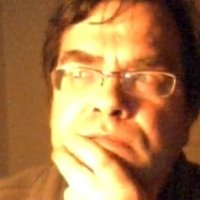 Jos Smolders (1960) has a long track record as composer of electronic and electro-acoustic music (since 1981). Jos Smolders has always regarded electronic music as his passion and explored the sonic realm in many ways. To that end he started in 1987 Electro Acoustic Re-Research, in short EAR. This vehicle he used for his writing, publishing and research. The “re-” in front of Research indicates that EAR wanted to research musical history from a different perspective: until then the approach was mostly academic.
Inside his EARLabs he explored the academic, traditionally electronic form of sound production but also that of the popular culture. He has studied, produced, mastered, remastered the works of others and himself. He coached younger artists. Professionally Jos Smolders has a lot of experience as consultant and strategist and advised in major projects.
Recently he started EARLabs mastering services for electronic compositions.
http://www.jossmolders.nl