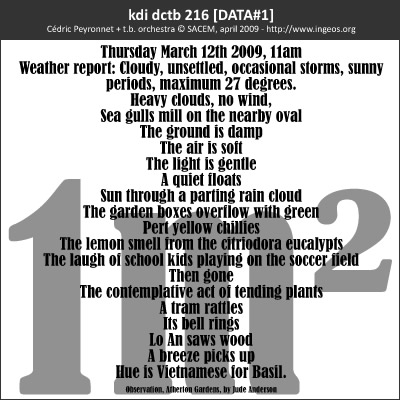 kdi dctb 216 is a 12 mini-CD series published by kaon between 12th April, 2009 and 12th April, 2010. Each CD contains a 12 minutes sound piece, composed each month by Cédric Peyronnet : toy.bizarre – between March 2009 and March 2010, based on observations and data reported by Jude Anderson about 1 m² of the Atherton Gardens, City of Yarra (Melbourne, Australia)

“The first disc is inspired by the circumstances at the garden on the 12th of March 2009 at 11am, and the cover offers us a blueprint for what Peyronnet had to work with, letting us know it was ‘27 degrees, cloudy and unsettled with no wind, damp ground, soft air and a lemon smell from the citriodora eucalypts.’ These instructions, amongst others give us an elongated metallic drone that initially attracts other sounds like barnacles, building in intensity before subsiding to a warm gentle quite subdued growl that may have been a response to ‘a quiet floats,’ before evolving into what I can only describe as ethereal musique concrete. It’s not clear whether he actually gathered some of his sounds from field recordings of the park while he was here in July last year for the Liquid Architecture Festival, though it’s highly likely that he did, as he has a history of sound mapping and possesses a real curiosity about not simply reproducing the sounds of a place but creating a more personal interpretation of the space. Yet his sounds really straddle the border between the organic and the processed, so often you’re not even sure what you’re hearing.”
By Bob Baker Fish in http://www.cyclicdefrost.com