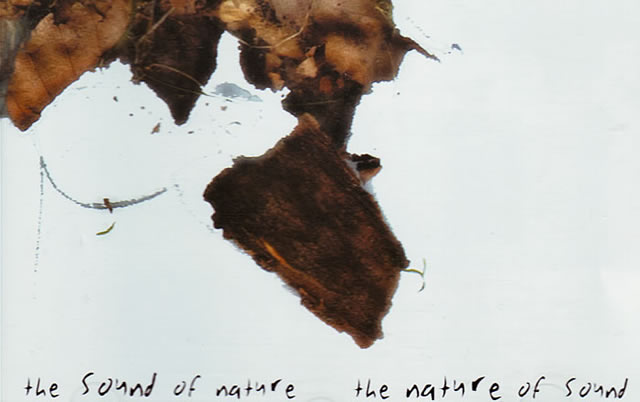 “the sound of nature ~ the nature of sound” is a compilation CD with Francisco Lopez, Giancarlo Toniutti, Jeph Jerman, Seth Nehil & toy.bizarre, Kiyoshi Mizutani, MNortham, Eric La Casa.
A confrontation of different ideas, views, about nature … and sound…
From the electroacoustic deep soundscape of Eric La Casa to the droney stones of Giancarlo Toniutti, from the rough fresh stream field recordings of Kiyoshi Mizutani to the heavy processed insects, wood and grass sounds of Seth Nehil & toy.bizarre… from the silent nature of Francisco Lopez to the noisy and windy contact mic recordings of Jeph Jerman… not to forget the poignant Pacific floor subduction zone sound composition of MNortham.
“the Sound of Nature – the Nature of Sound” is an unique occasion to listen to the work of artists usually working with field recordings and to understand the way they interpret and use the landscape and its sound elements and particularities with their own sensibility.

Kaon is a small label from France, having previously released music by mainly Toy Bizarre. Now after a silence of nearly two years they are back with a compilation of sounds from nature, soundscaping or whatever you wish to call this. It opens with a lengthy piece by Francisco Lopez, who rumbles at the far end of silence. Giancarlo Toniutti, not a frequent participant in compilations, has piece that involves cowbells but no cow sounds. They might be tapeloops, but they might not be, it’s hard to tell. Next up is Jeph Jerman, who seems to be letting go of the name Hands To when it comes to doing music dealing with environmental sounds, with a piece of heavily EQ-ed wind sounds and scrapings upon rocks. The only collaborative piece is by US composer Seth Nehil and French Toy Bizarre, with a beautiful piece of drones (I am not really sure if they were made with the use of electronics), rain and wind sounds. This is also one of the few pieces on this CD which has progress in sound throughout. Kiyoshi Mizutani offers water sounds from a mountain stream and a reed – a most curious piece, which in all it’s simplicity is quite nice. Mnortham is also a name lurking around in the world of environment music and he too offers drones and soft crackling of wood, or maybe it’s a small fire outside. Like the Nehil/Toy Bizarre also one with a real composition and not the presentation of things how they are. Same can be said of Eric La Casa (‘s entire work) who stands strong in the tradition of French electro-acoustic music, but applied to just environment sounds. All of these pieces are lenghty excursions (around 12 minutes for most of them), but for the most part they are minimal too. It’s all very strong material for this kind of music, so most welcomed.
(FdW) Vital weekly n°282